Following on from the earlier post about Plymouth Sound On the Buses, Gordon Sparks found this article from the Western Evening Herald (as the local paper was known then) from March 1978 about the decision to allow Plymouth Sound to advertise on the open-top bus.

It seems not everybody was happy about this development as you can read in the transcript:

A commercial radio station is to be allowed to use a bus belonging to Plymouth City Transport Department for advertising.

At a meeting of the city’s Transportation Committee yesterday, city transport manager Mr. Jack Maiden told members that Plymouth Sound wished to advertise on one of the yellow open-top buses during the summer. This would bring the city council £595.

Members were shown a model of the bus with “261 Plymouth Sound” in red on the front, sides and back.

Mr. Harold Lobb (Lab.) said he had always resisted advertising and would continue to do so.

“This is nothing more or less than prostituting of the service and uniformity of the fleet,” he claimed.

Members voted eight to seven in favour of allowing Plymouth Sound to advertise on the bus.

It’s interesting how times have changed. Of course, the bus services are privately run now, but it is more unusual to see a bus without advertising on it than one with.

The bus in question is most likely this one (or an earlier version of it): 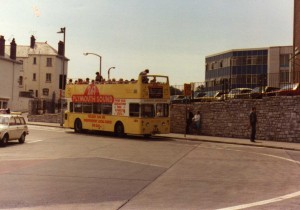